Satsuma: the joy of beauty offers you a data-base on Satsuma marks and makers. The database might be helpfull for collectors to identify their satsuma-earthenware. The database is free to use for anyone who is interested.

How to read the datafile Marks and makers.

> scroll down to datafile

This file consist of  three sections:

1: Characters what can be seen frequently within a mark, without being part of the actual makers name.

The name of the maker can appear isolated, but it is often surrounded by several other characters. Multiple names can be listed on the same item, for example the potters name in addition to that of the decorator. Common characters are:

2: A list of signatures with the character 山 in it (Group 1)

Once you have isolated the characters for the makers name by excluding the other characters, you will find that many of the signatures appears to end with the character 山, pronounced yama which means mountain. If it appears in the name, however, it is usually pronounced as Zan, for example Kinkozan, Taizan or Meizan, only occasionally as Yama, for example Kazuyama.

A brief guideline for the identification of a maker, found on a piece of Satsuma.

What's in a name? 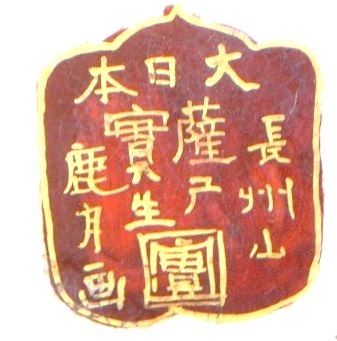 For every collector of art or antiques it is a sensation to find out for a specific object who the maker is, how old it is and where it comes from. This also applies to collectors of Satsuma. A signature or a trademark can help with this, but its meaning should not be overestimated. The true value of any Satsuma object is in the craftsmanship and the beauty what is in the work itself and not in the signature. The signature can offer you only a rough indication to the maker, the age or origin of the production, the object itself tells the true story.

A few remarks should be kept in mind:

This document is a PDF-file. If you know a name or part of the name and want to look if it is included in this file, you can search for it using the shortcut Ctrl + F, after which the search screen appears. You can also search by using Japanese characters.

Hi - I have a question regarding a mark that is on the back of a piece of porcelain that survived the 1906 earthquake in San Fran, CA. May I send you a pic? How?

Thank you so much for making this available for research, I very much appreciate it!

You have a related mark under Ryuzan, for 龍 山, which I believe is the Kiernan signature in question.

Thanks again, Howard, I appreciate your contribution to correct errors and mistakes in the list. It's obvious that 龍山 must be Ryuzan and not Ryozan. I change it for the next update.

Hi Richard, I found another error in the marks list. Under "Ryozan", there is a black & gold mark from Kiernan which he translates as Ryozan. However, it is better translated as Ryuzan. I will add mor

Dear Mr. Brugge, Please, send your photos and questions to info@satsuma-database.nl and I will try to help. Kind regards, Richard

Hello . I was recently given some Satsuma vases and I am trying to find the authenticity of them. Would you be able to help me? Thank you very much for your time.