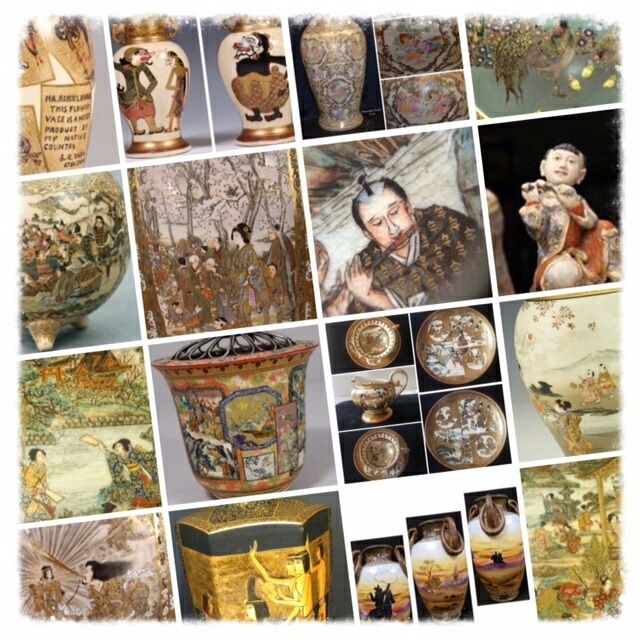 The Wonderful World of Satsuma

The attraction of Satsuma earthenware is partly in the sometimes breathtaking refinement of the paintwork. Besides of the quality of the brushwork there is also a lot to see what is on it, and much of the charm of Satsuma yaki can be traced back to the exotic attraction that it exerts on Western eyes. Not coincidentally of course because Satsuma pottery from the Meiji era was to a large extent intended to charm the west. Originally, these products were scarcely decorated , because for the Japanese people the beauty of Satsuma eartheware was in the beautiful body of the earthenware itself. The ivory coloured of the clay, deepened by the fine-grained crackle of the glaze did not need more as just a sparing decoration what was in perfect balance with the ivory-white of the body.

But in Europe and the United States, in Early Meijiperiod one was excited and full admiration about Japan, a country what in these years started to reveal itself after centuries of isolation.  The west wanted to see this exotic Japan, and Satsuma producers merely responded to the demand from the west, portraing it in the way they wanted it: glamorous geishas, noble warriors, gods and dragons in mysterious, but enchanting landscapes were painted according to  western criteria of beauty, and by applying new learned techniques like the use of fluid gold or washed enamels. From the beginning of the Meiji period, we see an increase of this kind of paintwork which sometimes completely covered the body itself, and in a style what is much different as seen in the period before.  It is this pictorial richness of Satsuma ware what explains much of its appeal, and the stunning way in which that exotic, arcadian and archaic Japan was depicted is still a source of joy for the Satsuma collector.

These data files tries to give an impression of the way in which ancient Japan was presented to the West.

Scroll down to the IMAGES ON SATSUMA file.

Tales, Legends and Myths on Satsuma-ware 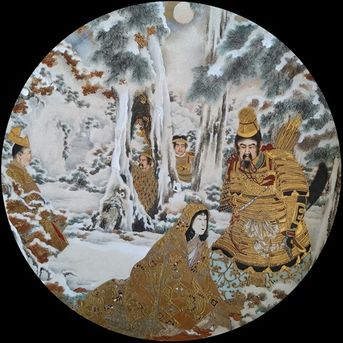 Japanese tales, legends and myths are an important cultural aspect of Japan. These Monogatari (物語) as it is called in Japanese language, are allways fictional stories, even when it is based on a historical event.  Since these monogatari are grained deeply in Japanese culture and society, it is not surprising that many of these stories were also depicted on Satsuma products. But these tales may be embedded in the cultural awareness of every Japanese, this is certainly not the case for Westerners. We grew up with another framework of tales and legends, and looking at a beautifull picture painted on a Satsuma-saucer we are not able to recognize the story what is behind it.  Unfortunately, because it should give an extra dimension in the appreciation of the work itself, and a deeper understanding of the rich culture Japan has to offer.

It is impossible to give an overview of all the stories that you can encounter on Satsuma products. It is also not useful when it is not linked to a concrete example. This data file therefore assumes the opposite: It shows a Satsuma object on which a story is depicted and gives a brief description of that story. The number of examples is still small, but will increase as time goes on. New examples are therefore very welcome. If you think you can contribute a new story to this database, please contact us: info@satsuma-database.nl . 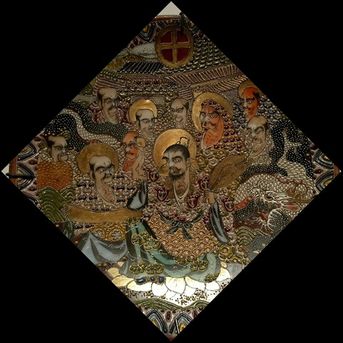 Satsuma objects are sometimes lavished with the images of gods,deities and holy men, the so called immortals, sitting together in a smaller or largere group, sometimes on their own. They all can be traced back to the complex mixture of religions and  beliefs that has merged in Japan, with influences coming from Hinduism, Buddhism, Taoism and Shintoism.

Shinto is said to be the oldest religion in Japan, probably originated from the same time as Christianity. The term shintô can be translated as “the way of the gods”, and indeed there are many shinto gods, the Kami, which must not be seen as a ‘personnel gods’ as we know it in the west, but as spirits that can live anywhere. It is the spirit that is believed to be present in nature, in mountains and oceans, as well as in natural phenomena as storm and thunder.

In the 6th century, Buddhism was imported from Korea, with a different view on life and nature and with different Gods to worhip. After a period of resistance eventually  several of these Buddhas (butsu or nyorai in Japanese), and bodhisattvas (bosatsu) were adapted, interwoven with the shinto gods and placed in a religious concept what only can be found in Japan. This mixture of Shinto gods an budhistic holymen grained deeply into Japanes cultural and spritual life, what was also reflected in Japanes art. They were depicted frequently on blockwoodprints, netsukes and scrollpaintings and it’s only normal that they can also be found on satsuma wares.

This section tries to give a brief survey of the religious figures and mythical creatures what can be found on Satsuma-ware. 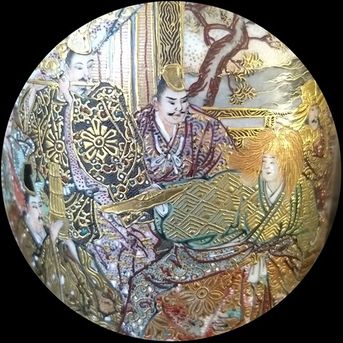 Troughout the year, there are festivals and celebrations in almost every region of the country. Since they are part of Japanese cultural life, and celebrated by the inhabitants of  small villages as much as by the aristocrats and upperclass of Japan, it is therefore not surprising that these festivals, parades  and other festivities are often depicted on Satsuma.

In this section we present some of these cultural events what can be seen on Satsuma ware: 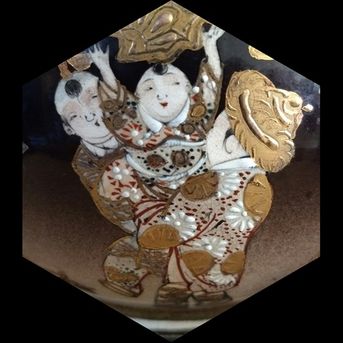 Children play, and that is of all times and cultures. The games they play may differ per region, but they also have a lot in common.  It is interesting to know that by playing, children train themselves in the kind of behavior what is expected from them when they became adults. So for children it may seem that playing is just having fun, but how and what they play can also be considered to be an initiation into the values ​​and norms of the society in which they grow up. Because gender is the most important distinction, there is always a difference between the games of boys and girls. Girls play more often games of skill or focussed on caregiving, boys are more focussed on competition and struggle. Their play is what society expect them to become. Since children are often depicted on Satsuma objects, these images also can give you an idea about how during the Meiji-period children were seen by adults.

To get an impression on this subject, this section tries to give a few themes, illustrated by examples as found on Satsuma ware. 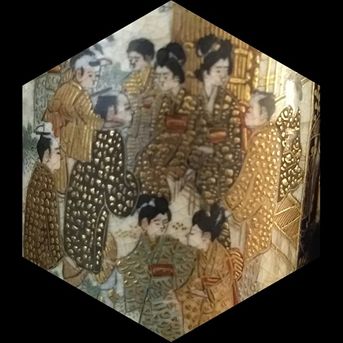 Satsuma pottery from the Meiji period shows a multitude of images what  shows Japan according the way the West like to see it. By all means that image is not Japan from the moment it was made. It is even rare to find an image that is a true representation of Meiji-Japan. More likely you will find a romanticized image of ancient Japan, which goes far back in history, often to the Heian period that lasted from 794 to 1185, the last period in Japan's classical history.

By looking at the clothing and hair of the figures shown, you can get an impression of what period is being depicted. For both men and women in Japan, the haircut was an important means to tell someone's status, wealth and rank in society. So, by watching the hairstyle, but also the clothing and type of headwear, one can trace a lot to the period what was depicted on the image. Judging from what one can see on Satsuma ware, ancient Japan seems to be populated mainly by nobles, samurai and other high-ranking figures, a world in which their ladies are beautiful and do not have much else to do than strolling and enjoying the beautiful nature or to play with their children. It is rare to find a depiction of the everyday life of ordinary people on satsuma ware. But once again, Satsuma ware was exportware and the artists showed us the rich history of their beautiful country, just as we wanted to see. 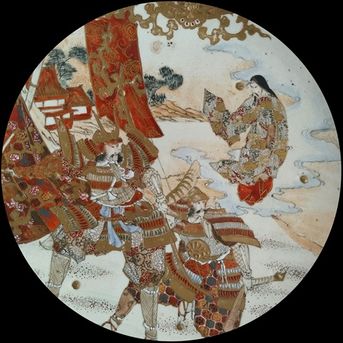 Samurai warriors can be found countless times on Satsuma pottery. Sometimes they are the main role players in a historical story, but most of the time they only act as a decorative element that appealed to the fascination of the West for ancient Japan. Often they are clearly recognizable as Samurai because of their equipment, but often they are not recognizable as such because they are portrayed as members of the good and higher class, walking in the park, or as a spectator of a procession. The latter is more in line with the truth: In the late Edo period, the samurai were no longer the heroic warriors they once were. And in Meiji period, when they appeared on Satsuma earthenware, they no longer existed at all. 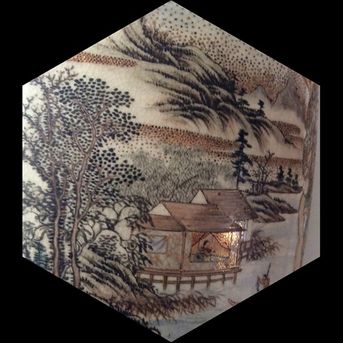 There has always been a special, almost spiritual bond between the Japanese people and the nature around them. Culture and nature seem to be in perfect harmony with each other, which becomes apparent in numerous actions. The flower arrangement, ikebana, is elevated to art, as is the cultivation of bonsai trees, a tradition that is more than a thousand years old. Gardens are laid and maintained with endless patience and craftsmanship. Patience, knowledge and attention for what you do are the key words, an attitude to life that comes from the Shinto religion that strives for a harmonious life with nature.

Their love for nature can also be found on Satsuma pottery. Landscapes, flowers, birds and other animals are favorite subjects and are displayed countless times.

However, the way in which this happened has changed considerably in time. The early decoration was simple with all due respect to the beautiful pottery itself. This changed dramatically during the Meiji years. The decoration sometimes completely covered the beautiful ivory tones of the pottery itself. The artists simply painted what was considered attractive in the west as beautiful. And it is still a feast for the eyes, to see the delicate details on good Satsuma yaki and the refinement and attention to every detail is breathtaking. In Japan itself, however, there were few good words for it. Their appreciation for the simplicity of nature was too far removed from these lavishly decorated export products.

In this section we present examples of the best Satsuma ware, depicting the japanese nature. Kinkozan is a name what  pops up many times, as indeed  Kinkozan had some of the best artists and decorators working for his workshop.

A view of the World outside 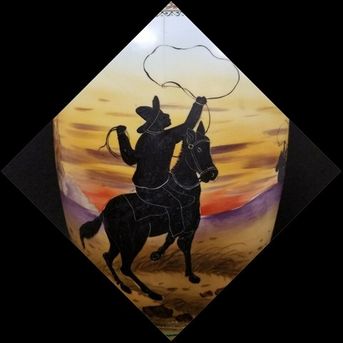 Because Satsuma pottery was mainly focused on export during the Meiji, the vast majority of it was intended to enchant the West with the mysterious world of then unknown Japan. It was a world of geishas and samurais, of gods and demomes and the beauty of Japanese nature. Incidentally, however, you also see examples on Satsuma work that is a representation of the world outside of Japan. As we are used to the typical Japanese images on Satsuma, it is sometimes strange to see. Japanese pottery and cowboys or wayang dolls, it does not belong together. It is therefore relatively rare  and always surprising to find these images on Satsuma eatrhenware. In this chapter we try to give you some examples of Satsuma earthenware depicting a view on the world outside.